The White Fairway London taxi was first registered on the 14/10/1994 and was made by Carbodies of Coventry.  It has the usual partition that London cabs have between the driver and customer, in this case the wedding couple.

It sits five in the rear compartment, three persons on the bench seat and two pull down seats, ideal for bridesmaids, with a step that can be attached to the outside making easy access for long dresses!  Please note it only has seat belts for four persons in the back.

It worked the streets of London until I purchased it in 2010.  The automatic gearbox has been overhauled and the vehicle has a current MOT, is taxed and insured.

The Beardmore London taxi was first registered on the 18/12/1959 and is completely original and has a Ford Consul petrol engine .  Goodwyn Taxi Cabs Ltd of 16 Wimpole Street London bought the cab for approximately £900 which in those days was a lot of money!  The cab was kept in their ownership until 1962 when it was sold to a London cab driver and was retired from London service in the early 1970's.

I purchased it from a private owner in 2018, it sits four passengers in the rear compartment with the partition between the customer and driver.  No seat belts in the rear.  All legal due to the age of the vehicle.  It is a two tone colour of Black and Maroon and is classed as a historic vehicle.  It does however, (although not legally required) have a current MOT and is insured  It has a working taxi meter which shows the price of a fare in pounds, shillings and pence!

We have six bookings this year so far for weddings, unless the government decides otherwise, they will be going ahead.  We can understand your hesitation and frustration but we are still very much open for business and looking forward to your enquiries.  There is a partition between the driver and the wedding couple in my wedding taxi. 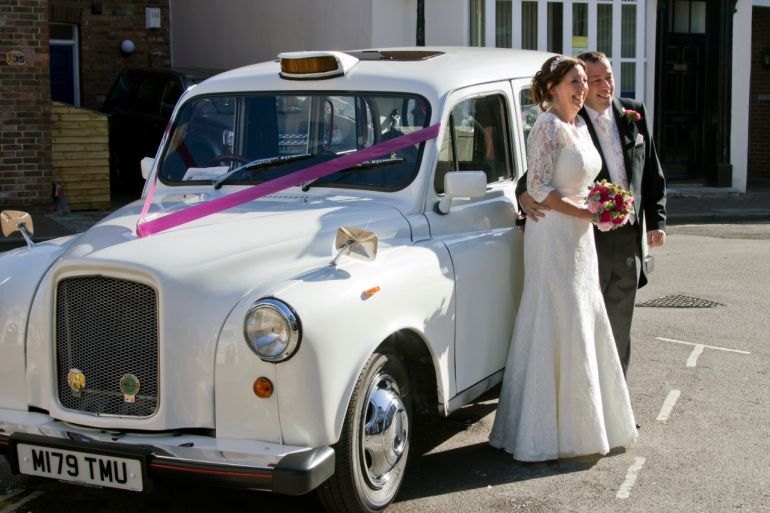 « Back to all posts